Tasha Korrado is a scoundrel with a larceny streak a parsec wide and the skills to back it up.  If something needs to be smuggled through a dangerous blockade she may be the pilot you are looking for.  She is short and agile, with curves where it counts.  She takes risky jobs, sometimes for the cash but most often for the thrill of it.  She lives for fast money, fast ships, and fast men.  Not always in the same order.

Background:   Tasha was born on Nar Shadda to a pair of Corellian-born human pilots and traders.  She learned early on that the only way to earn a real living was to earn it any way she could – as long as it was profitable.  This attitude has gotten her into quite a few scrapes, but so far she has been able to talk, fly, or in some cases fight her way out.  While she will protect herself and her goods however is required, she does draw the line at outright murder.

Her hair has been modified to change color easily with a EM-pulse from a controller.  It is short and punky with several colors mixed together.  Her dress sense is what could be best described as eclectic, but she is most often to be found wearing her flight suit unless she is trying to set up a mark.

Like many sentients in the galaxy she has very little regard for droids, maintaining that they are purely property and tools to be used as needed.  Her only constant companion is that of her star ship the “Corellia’s Pride”, a heavily modified JM-5000 Jumpmaster Long Range Scout. 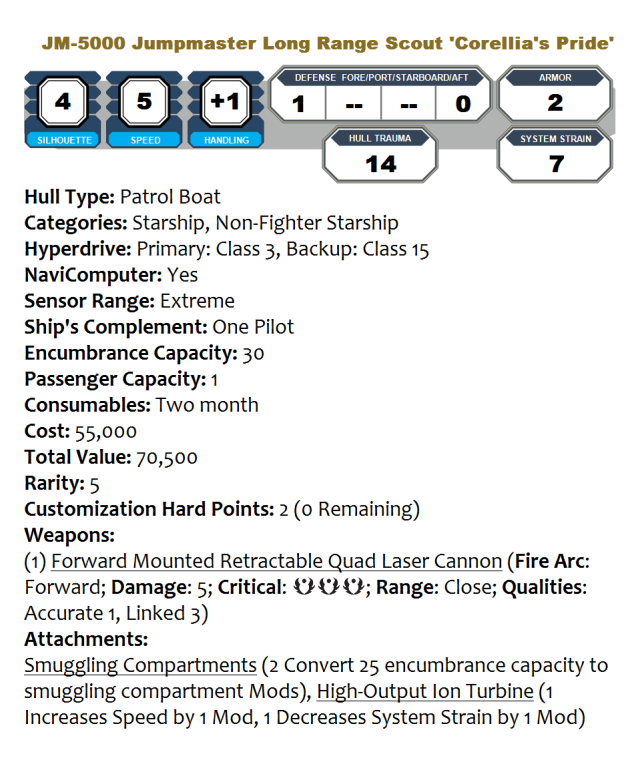 Design Notes:  Tasha was created as a player character foil and a source of adventure hooks.  She makes an excellent pilot rival for a group, or as a hired pilot if the players need one for a short term job.  As she runs more than a few cons, one might involve a player character or two.  She always looks out for herself, but won’t try to screw over a client or crew mate.

The picture files attached to this article were created by OggDude’s Character Generator.